Shock Events, Trump Policy and the dividing of America

From Heather Richardson, professor of History at Boston College:
"There is an important non-partisan point to make today.
What Bannon * is doing, most dramatically with last night's ban on immigration from seven predominantly Muslim countries-- is creating what is known as a "shock event."
Such an event is unexpected and confusing and throws a society into chaos. People scramble to react to the event, usually along some fault line that those responsible for the event can widen by claiming that they alone know how to restore order.
When opponents speak out, the authors of the shock event call them enemies. As society reels and tempers run high, those responsible for the shock event perform a sleight of hand to achieve their real goal, a goal they know to be hugely unpopular, but from which everyone has been distracted as they fight over the initial event. There is no longer concerted opposition to the real goal; opposition divides along the partisan lines established by the shock event.
Last night's Executive Order has all the hallmarks of a shock event. It was not reviewed by any governmental agencies or lawyers before it was released, and counterterrorism experts insist they did not ask for it. People charged with enforcing it got no instructions about how to do so. Courts immediately have declared parts of it unconstitutional, but border police in some airports are refusing to stop enforcing it.
Predictably, chaos has followed and tempers are hot.
My point today is this: unless you are the person setting it up, it is in no one's interest to play the shock event game. It is designed explicitly to divide people who might otherwise come together so they cannot stand against something its authors think they won't like.
I don't know what Bannon is up to-- although I have some guesses-- but because I know Bannon's ideas well, I am positive that there is not a single person whom I consider a friend on either side of the aisle-- and my friends range pretty widely-- who will benefit from whatever it is.
If the shock event strategy works, though, many of you will blame each other, rather than Bannon, for the fallout. And the country will have been tricked into accepting their real goal.
But because shock events destabilize a society, they can also be used positively. We do not have to respond along old fault lines. We could just as easily reorganize into a different pattern that threatens the people who sparked the event.
A successful shock event depends on speed and chaos because it requires knee-jerk reactions so that people divide along established lines. This, for example, is how Confederate leaders railroaded the initial southern states out of the Union.
If people realize they are being played, though, they can reach across old lines and reorganize to challenge the leaders who are pulling the strings. This was Lincoln's strategy when he joined together Whigs, Democrats, Free-Soilers, anti-Nebraska voters, and nativists into the new Republican Party to stand against the Slave Power.
Five years before, such a coalition would have been unimaginable. Members of those groups agreed on very little other than that they wanted all Americans to have equal economic opportunity. Once they began to work together to promote a fair economic system, though, they found much common ground. They ended up rededicating the nation to a "government of the people, by the people, and for the people."
Confederate leaders and Lincoln both knew about the political potential of a shock event. As we are in the midst of one, it seems worth noting that Lincoln seemed to have the better idea about how to use it."

For more information regarding "shock events" and their role in political happenings, you may wish to follow the below link:

Link to a story which may shed some more light on Steve Bannon's true role in the government of the United States of America: http://www.gq.com/story/donald-trump-is-just-a-puppet-steve-bannon-is-president


* Steve Bannon is Donald Trump's choice to be his Chief of Staff as well as his appointee to the National Security Administration.  Bannon has no prior experience with holding elected office, he has no government administrative experience.  He has never served in the military he has no experience with the intelligence gathering community or agencies of the United States.  All of this makes him a extremely questionable choice to lead our national security efforts. 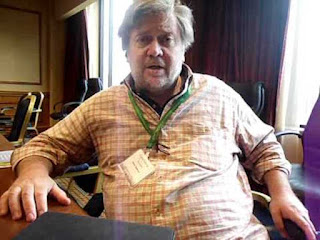 These organizations are often listed as hate/domestic terrorism groups dedicated to racist and xenophobic agenda's which allegedly support the overthrow of the American government.  After the general public and advertisers became aware of this information, the majority of their then advertisers, severed ties with Breitbart News.

The American Nazi Party, Bretibart News and the Klu Klux Klan all deny being hate/domestic terrorism based or affiliated organization and assert that they are not xenophobic or racist.  They describe themselves as "family values and Christian based support networks."  Breitbart News further states that "protection of the State of Israel" is the reason for it's founding.

At the time of this posting, members of the Republican National Committee are largely not endorsing Steve Bannon for any government position at any level.  Most of America's trade partners and military allies have expressed "deep and disturbing concerns" with Trump's nominee, Steve Bannon.

Statement by John McCain and Lindsey Graham, Republican Senators regarding the "Muslim Ban" created by Bannon and Trump: http://www.mccain.senate.gov/public/index.cfm/press-releases?ID=587F2A2D-8A47-48F7-9045-CF30F0A77889

It should be noted that the "Trump Muslim Ban" as it is commonly referred to, makes exemptions for three Middle Eastern nations in which Donald Trump has business interests or countries of origin for the 911 terrorists.  People from those three nations are permitted to enter the United States freely.

Posted by matthew schauenburg at 11:23 AM